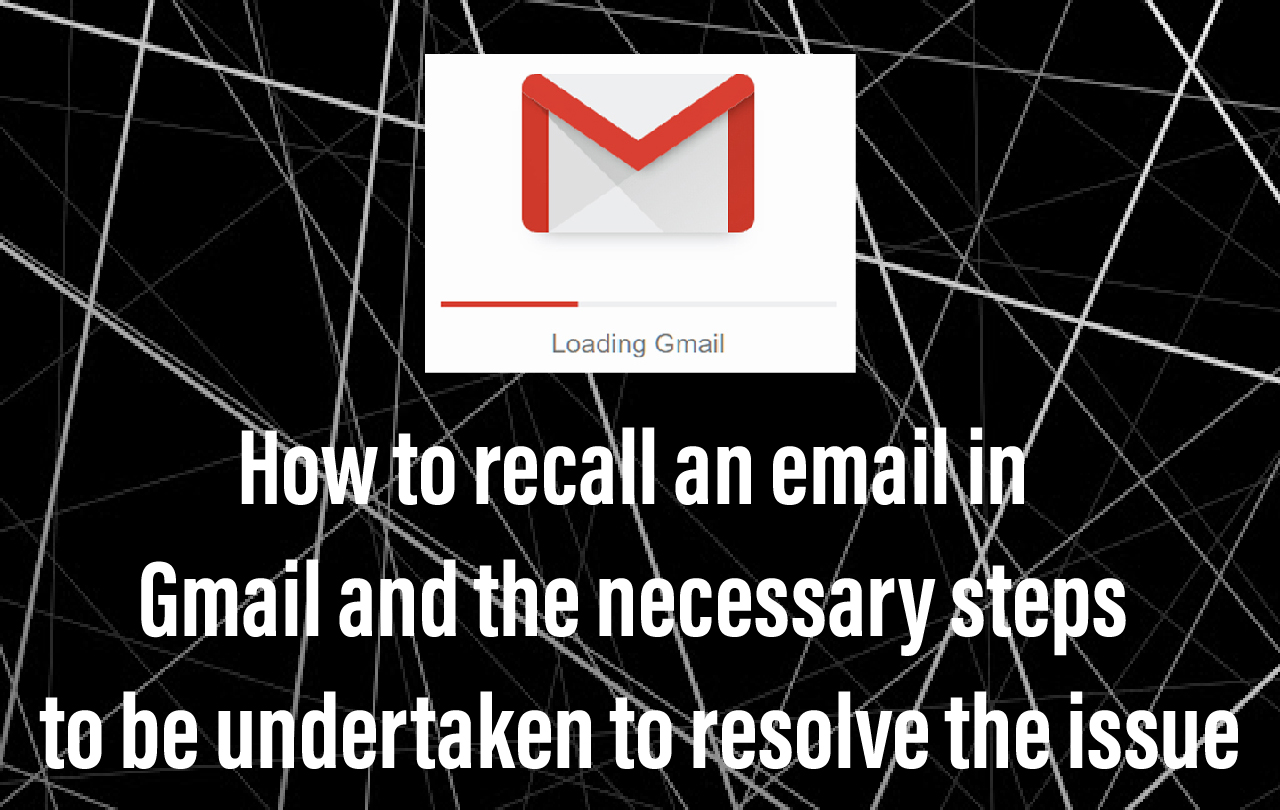 Gmail is a free email web service that has been developed by Google. The users can access Gmail on the web and also by using third party applications that concurs email content through POP or IMAP protocols.

More often than not, users by mistake sent the wrong email which comprises errors which they overlooked and wishes to go back in time and fix an email that they have already sent.

Some of the probable reasons why this happens are as follows:

These mistakes can cause big problems. For example, if a user accidentally sends an email with sensitive information to the wrong person then that could have grave consequences.

Luckily, there’s a simple way to recall an email in Gmail.

There is an “Undo” button that appears in Gmail automatically when a user sends out an email.

Users can adjust the undo settings to give themselves more time to recall an email in Gmail.

To go through with this, users need to log into their Gmail account on a desktop. Once there, users need to click on the little gear icon in the upper right-hand corner. A menu will pop open—from that menu, they need to select “Settings”:

Read Also:Do You Run A Dentist’s Office? Learn 10 Reasons Why You Need To Use Twitter!

In Gmail, the “Undo” button shows up immediately after users send an email.

By default, however, this button will only be available for five seconds after users send an email. As a matter of consequence, that doesn’t leave much time to realize a mistake and then go on to fix it.

Thankfully, Gmail also gives users the option to extend that time. Once they are in settings, they need to scroll down to the option that says “Undo Send.”

Once users have personalized the undo time for their Gmail account, they need to make sure that they scroll to the bottom of the page and save the changes that they have made:

This is a vital step because it’s easy to click away without saving the changes (in which case, the settings go back to default).

Once the users have updated their settings in Gmail, then it’s time to test those recall reflexes. They should go ahead and send a test email to themselves.

Once the email is sent, they will see a pop up in the bottom left-hand corner: “Undo”

Now, depending on the settings that users have selected, they have between five and 30 seconds to recall that email in Gmail.

Once they hit the “Undo” button, they will also receive confirmation that the email has been recalled: “Sending undone.

[wps_faq style=”classic” question=”Q: Can enabling the “Confirm before sending” setting in Gmail be useful?”]A: When users are about to hit send, there’s a little voice in the back of their head saying, “Are you sure?” But when they are angry or overtired, that little voice seems to go silent. Thankfully, Gmail has an option that asks its users, “Are you sure?” before you send an email. Users can enable this option in the settings of Gmail’s mobile app. First things first, click on the three lines at the top left of the app to open the menu. Then, scroll down to Settings: Then, under General settings, scroll down to the option “Confirm before sending”: Once users have enabled this option, Gmail will act as the little voice in their head, making sure that they want to send that email before it gets sent. [/wps_faq][wps_faq style=”classic” question=”Q; How to recall an email in Gmail for Android or IOS”]A; If a user is using Gmail on a mobile device, the process is almost the same. However, users will need to use their desktop to adjust the settings for the “Undo” button, this button will still show up when users use a mobile device to send emails. In the Gmail mobile app, users will see the “Undo” button at the bottom of the screen. Then in just a couple of steps, users can recall an email in Gmail, and painlessly erase those silly mistakes from their life. The users need to bear in mind that the email may arrive at the inbox of their recipient before they can recall it. Therefore, time is of the essence. Users have a maximum of 30 seconds to recall the email, but if the recipient has already started to read what the user sent, recalling the email won’t make much of a difference. The only drawback of this unique feature is that after a maximum of 30 seconds, there is no option to recall the message. Once your time is up, that’s it. Or is it? While the user’s past mistakes will have to stay in the past, they can avoid making future mistakes by reviewing their emails before they hit send. There are some simple ways to check emails and avoid embarrassing moments. [/wps_faq][wps_faq style=”classic” question=”Q: How to avoid sending emails by mistake in Gmail”]A: The users need to run the email through Grammarly. Grammarly is probably the user’s number one companion when creating emails in Gmail. Grammarly is an app that provides an extension for Chrome and Firefox, which means users,can use its expert proofreading technology to fix their emails while they are writing them in Gmail: In the free version, users can see grammar, spelling, and punctuation errors, as well as sentences with unnecessary words. If they purchase the premium version, Grammarly can also tell if a user is being impolite, overusing certain words, being insensitive, or if your sentences are unclear. Whether a user is writing sales emails to their boss, or any other kind of email, Grammarly is the way to go. [/wps_faq][wps_faq style=”classic” question=”Q: What to do if the links or attachments users included in the email was wrong attachment?”]A: Attaching a broken link or sending the wrong attached document in the email can have grave consequences. To avoid this, users need to take a few extra seconds before they send an email to open any links or attachments that they included. That way, users avoid sending the wrong thing to the wrong person. [/wps_faq][wps_faq style=”classic” question=”Q: Can a colleague’s opinion on an email to be sent help?”]A: Sometimes, the right thing to do is get a second opinion. That’s when it’s time to rely on team-mates for help. When it comes to important emails to customers and clients, users may want to get some help to see if the email comes off as too abrupt, if your point is clear, or if the tone is appropriate. Certainly, not every email will need a sign-off from a teammate. But when in doubt about sending an email, especially when it deals with a sensitive subject, users should trust their team to have their back. [/wps_faq]