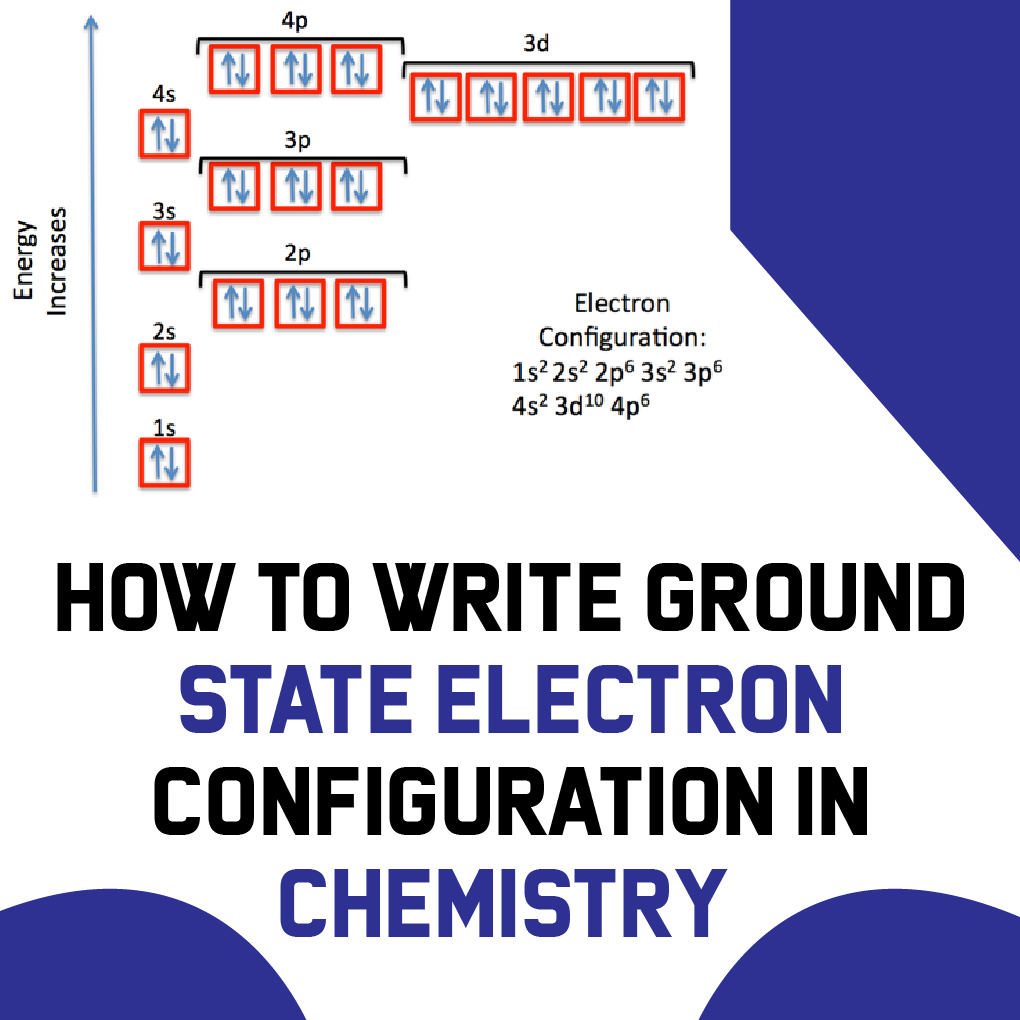 The ground-state electron configuration enlightens many different atomic properties from the electrons present in an atom to the different orbital and hybridization.

Understanding the Ground state electron configuration leads to understanding atomic structure and the periodic table which is the base of everything in chemistry.

Electron is a sub-atomic particle with a negative charge. An essential part of every atom which carries the electricity.

There are two Electron states:

The circles around the nucleus where the electrons revolve in the atom are called the orbitals. The orbitals have different shapes and orientations. Each orbital can have 2 electrons. The number of electrons can be increased depending on the orbital size.

This can be calculated with a simple formula:

Number of orbitals x 2 electrons = number of total electrons in the orbital.

For each principal quantum number, n, there is:

What is the principal Quantum number?

There are four quantum numbers; n, l, ml, and ms.

As mentioned earlier, the Principal Quantum number n denotes the energy of the electron in which it is found. The principal quantum number n has positive integer values (1, 2, 3, 4). The value of n is always positive, non-zero.

For instance, the iodine atom has its outermost electrons in the orbital 5p. Thus, the quantum number of Iodine is 5.

The value of angular momentum quantum number l is between 0 to n-1. It indicates the subshell of the electron. And, you can also find out the shape of the atomic orbital using this quantum number. The values of s sub-shell respectively corresponds to l=0, p = 1, a d = 2, and f = 3 etc.

What is Spin Magnetic Quantum Number?

Niels Bohr assumed that only the principal quantum number n decides the energy of an electron. This assumption is, however, true only for the Bohr’s hydrogen atom and other hydrogen-like atoms.

When we are dealing with the multi-electron system we have to consider the electron-to-electron interaction. Because the energy of an electron is determined by 2 things:

The following table shows the number of electrons that can occupy in each subshell.

There are general rules available to calculate the ground-state electron configuration of an atom.

“Aufbau” is a German word for ‘building up’. The Aufbau Principle is also known as the ‘building-up principle’.

It states that electrons occupy positions in the orbitals in the ascending order or order of increasing energy. According to this principle, The electrons must occupy the lowest energy shells first.

The occupation order of Electrons is as follows:

This equation might seem confusing but it is really simple. The electrons are shown to occupy the smallest energy shells first then move towards the higher value. The visual presentation below will help you understand more.

To understand this principle better, let us take the example of Bromine (Z=35). Bromine has 35 electrons, which is found in Period 4, in the Group VII of the periodic table.

The bromine has 7 valence electrons; the 4s orbital will naturally be occupied by 2 electrons. The remaining five electrons will go and occupy the 4p orbital.

Hence the full Ground state electronic configuration for bromine in accordance with the Aufbau Principle is: 1s22s22p63s23p64s23d104p5.

If you add all the exponents, you will get a total of 35 electrons, which is the confirmation of our notation is correct.

Hund’s rule is very simple to understand. It states that the electrons have to occupy the empty shells first.

The most stable configuration results when the electrons are spinning parallel to each other. For example, all alpha electrons or all beta electrons.

Let’s take an example of Nitrogen which has 3 electrons occupying the 2p orbital. Hund’s Rule states that the electrons have to occupy the three empty p orbitals first, namely the 2px orbital, 2py orbital, and the 2pz orbital.

The configuration shown below in the image is incorrect because the third electron does not attempt to occupy the empty 2pz orbital. Instead, it goes to occupy the half-filled 2px orbital. Therefore, this is a violation of Hund’s Rule.

Pauli assumed that every electron can be characterized with a unique set of four quantum numbers. In simple words, 2 electrons in each orbital will have different characteristics than the 2 electrons in the other orbital.

Therefore, if two or more electrons occupy the same orbital, i.e. the 2s orbital, their spins must be opposite to each other.

How to write the Ground State Electron configuration?

To write The Ground State Electron Configurations, follow the diagonal rule. can be written using the principal quantum number n, and (s, p, d, f) with total electrons written as a superscript.

By following the diagonal arrow method you can easily write down the Ground State Electron Configuration of Sodium (Na) 1s2 2s2 2p6 3s1.

When writing down the configuration remember the order of s, p, d, f. The numbers with s come first following p and d and f.

The Ground State Electron Configuration is the state where the electrons have the lowest energy. It is the most stable state of electrons. The ground-state electron configuration is fundamental to understanding the molecular bonding, structure of an atom, and the properties.